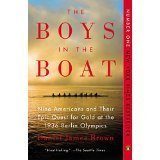 The Boys In The Boat: Nine Americans and Their Epic Quest for Gold at the 1936 Berlin Olympics

This book kept getting recommended to me and I finally had the chance to read. This is by far, one of the best books I’ve read in a long time. I could not stop reading it. I read at night. I read it while working out on my bike. And occasionally I’d stop working and read it during the day.

It’s a true story which made it even better for me.

Here was a bunch of working class boys in Washington State, some very poor, who competed in a sport that was, and still is, more for the  affluent society. The lead boy, Joe, has a heart wrenching story which only makes you want to root for him more. Throw in that Hitler was using the Olympics to fool the world into thinking Germany was wonderful and welcoming to all, and the story just keeps getting better.