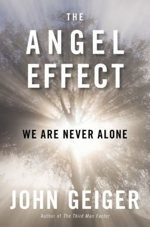 John Geiger’s first book, The Third Man Factor was the first time I realized I wasn’t crazy. I had a near death (in some ways an actual death) experience when I was caught in a flash flood in the Fiordland’s of New Zealand in 1984. I saw my life pass before my eyes, the white light at the end of the tunnel, a wonderful warm beautiful feeling throughout my body.

After reading his first book, I realized I was not the only person who had a guardian angel help them out of a difficult situation. Read my short version of my drowning on his website and others in the Third Man Factor Forum http://bit.ly/18HuLma. (I just looked at nearly 8000 people have read my story there so far).

The Angel Effect is a followup book which includes more research on attempts to explain this phenomenon and it is also filled with many more stories, including 6 pages devoted to my story.

These visions have been going on since humans became humans, the bible is filled with them, but he also notes many other stories from 1000’s of years ago as well. Native Americans learned how to create the visions using special ceremonies, as did other cultures.

How do these happen? Is it something our brains kick-in to deal with difficult situations? Many people try to explain it. I KNOW that I have a guardian angel. I saw him, as have 1000’s of others. I FEEL him when he’s around. Call me crazy if you want, but check out the Third Man Factor books and his website and you have to at least consider the fact that we all have a guardian angel.

I found this book to be a quick easy read with many compelling stories about the Angel Effect or Third Man as it was called for years.