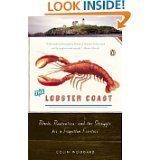 Subtitle is: Rebels, Rusticators, and the Struggle for a Forgotten Frontier.

Having lived here in Maine since 1984, I have always been fascinated with this “Maine mystic” and although I’ll never be a “native” I think my kids will be (at least I hope so).

The author takes us back to the beginnings of the Maine settlements before we were part of Massachusetts even and how those hard nosed Scots and Irishman settled the Mid Coast and the French settled DownEast (next to New Brunswick) and how that made a difference in the independence that has become a personality trait of Mainers.  I love that he speaks about a fish house built on Monhegan Island (my wife and my favorite places) that was built in 1780 that is more than 170 years AFTER the first Europeans began fishing here!

How the natives dealt with us and we with them up to the “rusticators” who came from the cities and really began the tourism trade to the evolution of fishing / lobstering and the fact that the lobsterman are one of the ONLY fisheries in the world that regulate themselves.  Another great independent trait.

I feel like I actually know the “personality” of Maine much better and WHY so many things are the way they are i.e. town meetings still and the relationship with “people from away”.

I highly recommend this book if you want to know what Maine is.