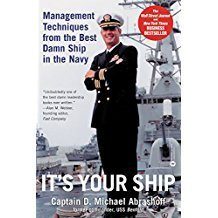 I have been doing some research into “stay interviews” which are done while employees are still working at your company versus “exit interviews” when you ask them “What went wrong? What could we do better?”

This book is what was recommended by someone in a Facebook recruiter group I am in as one of the first books that talked about putting employees first and asking them what they think. This Captain of Benfold ship challenged longtime Naval leadership by giving responsibility to the crew and talking with the crew about what they thought could be improved. It was remarkable how it affected his retention. Before he came aboard 80% of the people who could leave at the end of their time, left. When he left, it had completely flipped. They loved working there.

According to a Gallup poll, 65% of people leave companies because of a manager. And when Cpt. Abrashoff arrived he reviewed the exit interviews of sailors on his ship and found that the reasons people were not reenlisting was:

So his philosophy of leadership changed to listening, actually “aggressive listening” is what he calls it and asking them “is there a better way of doing this?”

This is a great book about leadership and motivating employees by respecting them and listening to them. He bucked quite a few rules and I am guessing he wasn’t loved by everyone in the Navy because of it, but it certainly sounds like his crew loved it. And the results are pretty amazing.