You are here: Home / Book Reviews / Guns, Germs, and Steel. By Jared Diamond

Who would have thought that one reason civilization grew faster in EurAsia is that the continent is laid out ‘east to west’ vs North America / South America and Australia which is  ‘north to south’? 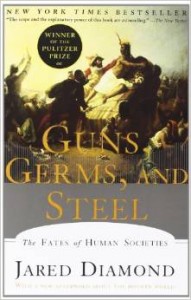 Who would have believed that the domestication of animals was so complex and vital to human development?

We all hate germs but I didn’t realize how much of a factor germs were in European development across the world.

Well, Jared Diamond has done some “big” thinking in this book which I really enjoyed. It is a monster book of 440 pages, plus 29 pages of “Further Reading” related to each chapter but I could hardly put it down. He makes persuasive arguments of why Eurasia developed civilization faster than many other parts of the world while recognizing that no one human race was “smarter” than another. He has done extensive research in Papau New Guinea with some of the last hunter-gatherers in the world and when one of the natives there asked why the rest of the world was more advanced than his country, Jared began to put this book together.

Here are a couple of his arguments that he develops in the book.

There are more interesting discussions on the why and how’s of human development that I found fascinating. His view of our human development is over 50,000 year view and integrates a number of different disciplines including archeologists, genetics, linguistics, and more.

This book is probably not for everyone as it is dense in places, but I found it very readable and understandable, and truly fascinating broader thinking than I could have done without the author really laying out his arguments of “Why Europe and not China?” and “Why did Spain take over the Mayans?” and “Why didn’t zebra’s domesticate but horses did?”.

You can also receive our monthly career practitioners email newsletter which includes a variety of career topics, industry news, interesting events, and more.