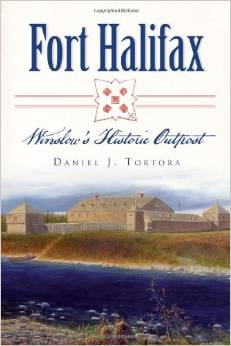 Having now lived in the greater Waterville / Winslow Maine area since 1984, I have driven by this blockhouse from 1754 for 30 years. I’ve climbed in it with the kids and was devastated when the April Fool’s Day flood of 1991? washed it down the Kennebec. Fortunately they found much of the blockhouse down river and put it back together with a flood stabilizing design. It is the oldest blockhouse in the U.S.

This is the first book to actually pull together the wonderful history of this fort and the importance of it to the development of the area. Settlers were not coming to this area without some protection and the Brit’s in Boston wanted more control of the area from the French in Quebec.

Fort Halifax is on the confluence of two major rivers, the Kennebec and the Sebasticook, with the Messalonskee River also nearby. This meant transportation to the north and the ocean, so in the 1600’s this area held the 2nd largest native population in the State.

If you are interested in the history of Maine, this is a wonderful book. Not only do you get a sense of the importance of the area, but also the people who made this all happen.

Although I do not know the Colby Professor who wrote this, I do know David Smith, a senior at Colby, class of 2015, who provided much research, writing, and photography to the book.