With so much insanity in the world and the news highlighting TOO much of it, I encourage each of you to think about what you are grateful for every day.

Here is my short list. My wife, family, my friends, Will Keim who has so far kept his cancer at bay-keep it up my friend, my cousins who I love and cherish deeply for the memories and for what lies ahead, my health as I continue to play hockey, backpack, kayak, fish, play guitar, and for my memories of my mom who I miss. There are many more.

My calendar pops up, “depart for Sacramento / PCT hike”.

Rees, Howard, and I have been picking away at the Pacific Crest Trail (2650 miles) since 1981 when we hike 400 miles of the stretch in Washington state. Since then, we’ve done mostly 110-130 mile hikes over the years. In 2012 we hiked 200 miles where the John Muir trail combines with PCT in California. 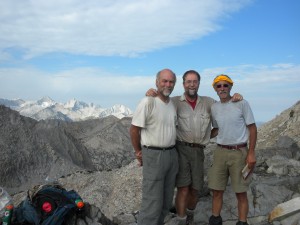 I broke my ankle in March and had to cancel. END_OF_DOCUMENT_TOKEN_TO_BE_REPLACED

My niece’s daughter, Kate, who lives in Minnesota had a class project after reading Flat Stanley to draw herself on a piece of paper and mail herself to Maine.  My job was to introduce her to the great state of Maine taking pictures, purchasing artifacts / memorabilia and generally showing her around.

Well….. I got into it. Taking her to my Career Development Facilitator (CDF) class one day for presentations, showing her the State Capital, letting her ride some lobsters, and stopping by the President of Colby Colleges’ office for pictures.  I documented some of the places we visited (including the oldest blockhouse from a fort on the Kennebec & Sebasticook River from the 1700’s) and sent her a few items to remember her trip by.

If you are interested in Flat Kate’s travels, check it out here.  https://peak-careers.com/blog/flat-kate/

A special “shout out” to the Wagar Middle School in Carleton Michigan learning about Mt. St. Helens.

I had just moved to Seattle in January of 1980 and that summer Mt. St. Helens was in the news all the time.  It was becoming active and the geologists were predicting it could blow anytime.   I lived in Seattle about 90 north of the mountain.  On a clear day I could see it from my apartment window..

I was hiking in the Cascade Mountains roughly 110-120  miles north of St. Helens when it blew up.  It sounded like sonic booms when a plane breaks the sound barrier.  Because we were camping we did not understand that it was the mountain erupting until we met hikers coming up the trail later that day.

One interesting tidbit was that people in Seattle did NOT hear the explosions like we did.  Turns out the sound literally BOUNCED up into the atmosphere  then back down to earth, then back up again, so there were places that heard the explosions and others that did not. They even heard it in British Columbia Canada!

The day after the 1st BIG explosion there were smaller ones that I could see from my apartment.  Sorry I can’t find that picture 🙁 but I vividly remember watching the ash shoot up into the sky from the mountain and could see the wind from the west (ocean side) push the ash towards the east.

This first picture is from Interstate – 5 from the WEST, looking EAST.

The next year I had joined 2 friends to hike the entire Pacific Crest Trail (PCT) from the Oregon border to the Canadien border.  This trail walks right through the Cascade mountain ranged and up until the week before we left in late June, the section near Mt. St. Helens was closed off to hiking due to the devastation and ash.  Then it opened up and we were the first people to walk on the PCT and we spent about 4 or 5 days walking through ash.

Here is a picture of Mt. St. Helens from the EAST looking WEST.  You can see the snow has mostly melted off compared to the above picture.

This final picture is taken of me in my hiking boots walking on the trail which is covered in ash.  There were no birds in this entire section of the trail, no animals, no sound except for some wind thru the trees.  It was very strange.  The ash got into our boots, sleeping bags, tents, everything.  When you get the ash I sent you, you can feel how fine it is.

There are 2 different feelings to the ash.  Put your finger in and you can feel that it is like the smoothest talcum powder you’ve ever felt.  There are also little tiny pieces of rock in it as well that you can often feel.

Anyway, I hope you enjoyed my pictures and a little of my story of how it was for me the year Mt. St. Helens erupted and also the year after when I walked through it.

Let me know if you have any questions.